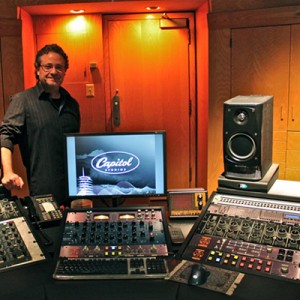 Before the remodel of the Capitol mastering studios began, Vosgien explains the transition, “The first piece of gear I was trying out was the Dangerous Monitor versus some other brands of monitor controllers. And the sound of my mains improved so much using the Dangerous Monitor versus the monitor section in the console I was using previously, it prompted me to tell everyone that we need to really get started updating our gear. I began bugging everybody that I needed to ‘get some more Dangerous gear’ because if it’s anything like the Dangerous Monitor we’re really going to be moving forward!”

Vosgien adds, “I’ve been using the Dangerous Master, Monitor and Liaison for at least 6 months now, along with the Dangerous MQ for metering, a discontinued piece that Bob at Dangerous was kind enough to hook me up with.”

Dangerous Evaluations
Vosgien had a very carefully thought-out plan to try the new prospective gear for his Capitol Mastering studio, starting with listening to projects he had already mastered in the past, “I’d have something that I mastered with my old setup, and then I would master it again using the same settings but implementing the Dangerous gear,” explains Vosgien. “And then I’d master it again with another manufacturer’s gear in the signal path. We got some equipment from other manufacturers too, another American company and one from Europe to compare, and slowly when I had time, I would audition the products. I ended up choosing the Dangerous gear, for sound quality and the mil-spec wiring, and the high quality stepped attenuators – I decided Dangerous Music is the stuff I want to really move my studio forward.”

“You get to put the gear through its paces,” adds Vosgien, about his concept of using the gear on a real master project, he’s able to get a sense of, “the workability and the ergonomics” of each piece he says. “I’ve been mastering for 25 years and I can be a little impatient. I want to arrive at the sound in my head very fast. That’s probably why my workflow is still about 90-percent analog processing. I do use some plug-ins now and again but I find that I can get to where I want to go quicker with my choices of analog EQ and analog compression. And if the project doesn’t need any processing, I want to transfer it as flat as can be. If it sounds great: do no harm. And the Dangerous Music gear allows me to do that better, because it’s transparent, pure, and well-made.”

When evaluating the new combination of Dangerous Music gear, Vosgien did some critical listening to very specific elements within the music, “There was an increase in the depth in the stereo field and more clarity,” says Vosgien about the Dangerous Music products. “We were listening to a really good sounding mix and I was focusing in on the reverb on the snare and the reverb on the vocal, the tail of it. With the Dangerous equipment all those things came out in spades. It was just like ‘Wow! We can really, really hear the reverb tail on that snare.’ Comparing that to the master I had done before not using the Dangerous gear, obviously it still sounded really good, but there was that ever-so-slight bit of smearing going on with my other setup, and things seemed slightly less separated and a little more glued together – more 2D as opposed to 3D. When I’m evaluating gear I want to be inside the music, I don’t want to feel that it’s a straight line in front of me. And when gear steps on the audio or degrades it, it tends to turn things into more of a straight line,” states Vosgien.

Room Redesign
“We basically took out the disk cutting console that’s been here since about 1972,” recalls Vosgien, explaining the room redesign. “It’s been modified many times over. We’ve got some great vintage Neve EQs in here that we kept, and the original first generation Sontec MES-430Bs that we kept. And I don’t cut lacquers, there used to be a lathe in here when I came on board in 1998. We just wanted to streamline things, clean up our signal path and take out the extraneous gear that was not really being used.”

Although the Dangerous Master has the built-in S&M mid-side processing, Vosgian reveals, “I had the dedicated Dangerous S&M box for many years. That was one of my secret weapons that I would use.” Years ago, Vosgien had read about Dangerous Music, then tried the S&M. “I ended up buying it, and I was impressed right away with the sound quality, I should say, ‘lack of sound coloration.’ He now appreciates the integration of the technology in the Dangerous Master, “To have the S&M function there at the flick of a switch is just awesome. If I don’t need it: it’s not in the circuit, and when I want it: it’s in the circuit. Which is what you really want in a mastering suite.”

Dangerous Liaisons
When choosing the Dangerous Music products for his mastering setup, flexibility was also a key to the equipment, with the addition of the Dangerous Liaison programmable analog router, “I wanted flexibility in a console that would allow me to quickly audition different EQs and compressors when I am running down a mix. The Dangerous Music setup totally allows this luxury with the Liaison. It’s a great piece of gear. To be able to choose between different outboard gear immediately, and change the order of it in the signal path immediately is so useful! Choose one compressor, put an EQ in front of it, choose another compressor, put an EQ behind it – without doing any patching – is just pure luxury. The Liaison is such a hip device. Now I have the Master, Monitor and Liaison and I’ve hooked up my Sontec and Neve mastering EQs along with other analog outboard gear to the Liaison,” says Vosgien.

When a live recording came through his studio to master, Vosgien immediately found the Liaison’s parallel processing the perfect solution to problems in the mix, “After having the Liaison only a month I used the parallel processing loop for a project,” says Vosgien. “A band that did some live recording 25 years ago had only a live board tape of their show, but the vocals were really peaky. So I was able to dial in some parallel limiting with the blend pot on the Liaison and get those vocal peaks really tamed. I did that first in the chain, then dealt with the overall EQ and mastering. That just worked really well. I was creating a more balanced mix first, and then I could master it. And I could do that at the same time with the Liaison!”

Recent Capitol Projects
Some recent projects Vosgien has completed with the Dangerous mastering suite include The Sick Puppies new release ‘Connect’ – “It’s a really well recorded album, they’re a commercial hard rock band. I also just mastered the second album from Graffiti6, both the bands are on Capitol Records. Both these projects benefitted immensely from the Dangerous Music gear. I do quite a few titles for HD Tracks, in which we are capturing audio at 192k,” he adds.

“I just finished one of many Frank Sinatra releases, we just did ‘Come Dance with Me’ – the original stereo 2-track was in here the other day, it really sounded great. I did Huey Lewis and the News, their ‘Sports’ album, for HD Tracks, and ‘Bad to the Bone’ by George Thorogood. Doing these 192k mastering jobs for HD Tracks and having the Dangerous Music gear just makes these projects that much better.”

Vosgien feels that the Dangerous Music gear retains all the depth and nuance that exists on the pre-masters, “With the Frank Sinatra, ‘Come Dance with Me’ HD Tracks reissue, it has a lot of up tempo songs with just blaring horn sections, recorded down in Studio B here at Capitol and that’s a pretty bright room. Some people might say ‘Wow, those horns are bright!’ – but that’s the sound, that’s the way they were recorded. I’m not adding mid-range or high-end to this master, that’s coming right off the tape machine. You hear the famous Capitol reverb chambers on Frank’s voice too, and all the instruments are so crystal clear now, it’s pretty amazing.”

As a 1984 graduate at the Berklee College of Music in Boston, Vosgien received a degree in Audio Recording, then moved to Los Angeles and started working at Capitol Studios. In on the beginnings of the compact disc format revolution, he started mastering at Capitol and remains one of their top engineers today, now breaking ground again with 192k masters for music retailer HD Tracks. As a musician and instrumentalist, as many of the best engineers are, he is a talented guitar player and loves and respects vintage guitars and Marshall amps – and Vosgien has mastered some of the legends of guitar including Larry Carlton, Lee Ritenour, Gary Hoey and Christopher Parkening. But Vosgien has his own combination of musical creativity and technical expertise, which enables him to master any genre of music.

Find out more about Capitol Studios and mastering engineer Robert Vosgien at: http://www.capitolstudios.com