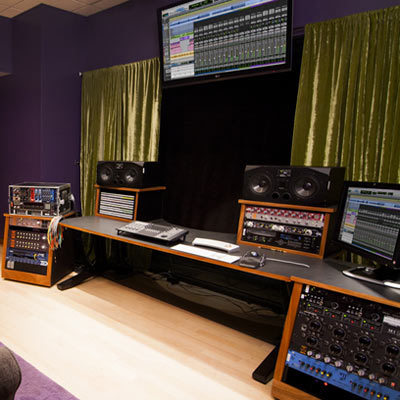 Blackbird Studio in Nashville, Tennessee, is one of the world’s best-equipped and favorite recording studio destinations for top musicians, producers and engineers. Artists such as Kings of Leon, The Black Keys, Jack White, Keith Urban, Sheryl Crow, and Tim McGraw have graced its live rooms. Studio owner John McBride brought in industry gear experts, musicians, and educators Kevin Becka and Mark Rubel to create a new studio and curriculum for McBride’s vision of The Blackbird Academy, Professional School of Audio. Becka chose Dangerous Music equipment for the new studio, including the company’s 2-Bus analog summing, the Liaison programmable analog router, the BAX EQ, and the Monitor ST monitor controller to complement and integrate with the AVID Pro Tools|HDX recording system. The new studio offers a hybrid analog and digital experience for the students, a reflection of today’s most popular direction for recording studio design.

The Blackbird Academy offers an experience-based education taught by expert ‘musical mentors’ – industry veterans, professional instructors and award-winning guest presenters. John McBride explains, “I am extremely excited to start The Blackbird Academy courses. Mentoring has become an important part of my life, and the opportunity to work with motivated, passionate students is a wonderful thing.”

The students get access to Blackbird’s stunning and vast gear collection, along with its studios for project-based learning. The new Studio I which incorporates the Dangerous Music gear has just been completed, and a special classroom, the ‘music recording lab’ that seats 30 students, is up and running.

When deciding on the core gear for the new room Becka had specific reasons for his choices, “Dangerous Music came to mind for three reasons: first, they were the first to adopt the summing model, second was their design philosophy and third was the build quality. They keep the gear out of the way – the audio path is transparent and all analog relay-switched, which preserves the tonal quality of the gear that you’re putting at the front end: pre-amps, outboard gear and microphones. This is a true professional environment, and one that will be reliable over the long haul.”

“Dangerous Music as a company is all about quality, their gear is just top notch,” says Becka. “I own some myself and I’ve used it for years; I know how it operates, it’s rock solid. I feel confident in (product design engineer) Chris Muth’s designs, and the company’s service. It’s a win-win-win for us in many ways.”

McBride says he’s bringing the excitement he’s had working with studio interns to the Academy students: “Occasionally we do sessions with the interns so they can get more experience. When you see that light go off in their eyes, that is one of the greatest feelings I’ve ever experienced. I love passing down knowledge and helping someone learn more about what they love.”

“We want to give the greatest education possible, in the shortest period of time, for the least amount of money possible,” McBride adds. “The Blackbird Academy has a fairly intense 6-month program. With the curriculum, and the quality of the instructors along with the incredible guest lecturers, the students are going to learn a lot of different ways to record audio. I want our students to learn from people who make a living in the business every day doing exactly what they want to do. They will have the knowledge they need to have a career in audio and become their own engineer, their own person.”

Becka explains more about the learning environment, “We have a sizable Pro Tools|HD rig with the HDX card wired for 48-channels, but we are starting with 32 ins and 32 outs. I figured linking two 16-channel Dangerous 2-Bus summing systems would do the trick. The patch bay, created by Mike Rhodes of SkinnyFish Studio Services is set up for mixing, with Pro Tools normalled to the 32 channels of Dangerous 2-Bus, but we can reconfigure the inputs easily for tracking.”

Although the new room is designed for stereo, Becka didn’t want to rule out expansion in the future: “We have the Dangerous Monitor ST, and while right now we’re not in surround, that room has potential for expansion. All we’d have to do is buy the ‘SR’ surround 1RU expansion option for the Monitor ST, so it’s future-proof.”

Becka also outfitted the new Studio I at The Blackbird Academy with the Dangerous Liaison programmable analog router. “The Liaison gives us the ability to patch different pieces of gear into a chain and then swap the order around, take a piece of gear in and out, and A-B it.” Becka points out the instructional value for students of easy and quick comparisons of different pieces of gear – their sound, the difference they make, and even in which order they are inserted.

“Part of what we’re going to teach at The Blackbird Academy is what we call ‘Ears On’ challenges,” says Becka. “The students are going to be able to hear and compare plugins modeled on a piece of gear versus the actual piece of gear – like a Fairchild – that we actually have at the studio. They will also listen to and compare the differences between microphones, for example a company’s attempt to make a microphone that ‘sounds like’ a Neuman U47, versus a real U47. There are many opportunities to do these ‘Ears On’ challenges, and the Dangerous Liaison will make this possible and instructive for the students.”

“The other piece of gear from Dangerous I love is the BAX EQ,” says Becka. “Because of what it lets you do on the filtering end, taking out frequencies at the extreme ends of the spectrum and giving yourself more headroom. And also to put that really nice ‘smile’ on a mix, where you’re just boosting the low-end and boosting the high-end. We’re also teaching a little bit of mastering, and the BAX EQ takes us into the mastering realm – there has to be a little bit of a finish on your final mix, and the BAX EQ is a really simple and great-sounding way to do that.”

Commenting on his experience in the music industry, Becka reveals his outlook, “Being associated with Mix, Pro Audio Review and Audio Media magazines over the last 15 years, I’ve seen the changes in the industry- how it’s evolved with the monolithic studio model and desktop model running in parallel. We teach both models here at Blackbird. In building this curriculum for The Blackbird Academy, we decided to incorporate both workflows because that’s what students are going to see, that’s the reality of production now.”

When asked about his feeling on the quality of Dangerous Music gear, McBride responds, “Good is the enemy of great,” speaking both about the quality of music and the Dangerous gear they chose for The Blackbird Academy. “We’re striving for greatness here. We want to make people go: ‘WOW!’ when they hear a recording. We want to inspire people. We have so much passion about audio.” And they will be passing that passion along to their students, no doubt about it.

Find out more about The Blackbird Academy and Blackbird Studios in Nashville at: http://www.theblackbirdacademy.com/