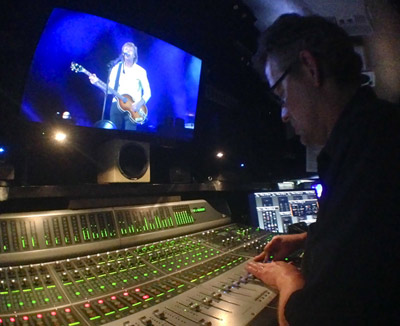 The day before sound check for Lollapalooza, Shepard set up the 2-Bus+ in his audio truck and ran his 10 favorite songs through it to get some ideas of what might work for sweetening the live audio mixes ‘on the fly’. By the end of the day he was confident with the unit in line and comfortable with the sonic imprint of the Paralimit and X-Former as the last thing in his audio chain. Scheduled to mix 5 bands a day for the live webcast, “I created a basic ‘starter setting’ for each band,” explains Shepard. “Controls felt very predictable and easy to use. I immediately felt like the 2-Bus+ was my safety net I could lean on a bit.”

“Opening night at Lollapalooza featured Paul McCartney and Saturday night featured Metallica. Both sounded great through the Dangerous 2-Bus+!” he exclaimed. “I really hit the Paralimit good on each set helping me hold the mixes together and pump up the volume. Even more than that, it feels good mixing ‘into’ the Para-limit, helping me dig up little nuances and subtle tones in the mix that give it color.”

Shepard also utilized the ‘X-Former’ processing feature on the 2-Bus+, “The transformer control really glues the mix together. It can be subtle or saturated like the output stage of a classic analog mixing console. Definitely giving me width to the mix,” he says. “I plan on adding a Dangerous 2-Bus+ to three of the American Mobile rigs right away!”

After wrapping up Lollapalooza, Shepard is scheduled to mix the ‘Best Of Firefly’ with mixer Steve Weeder for Springboard Productions, then heading to Washington D.C with the American Mobile crew for the Landmark Festival, and after that two weeks in Texas mixing Austin City Limits, a festival American Mobile has mixed the live music broadcast for since 2005.

The new Dangerous 2-BUS+ is a 2-space rack-unit, 16-channel, analog-summing mixer, with both XLR and D-sub inputs. New innovative features include 3 separate custom audio processors to add tone and color to mixes. The ‘Harmonics’ processor is a tuned harmonic distortion generator executed in parallel-processing mode with a blend control, ‘Paralimit’ is a FET limiter on stun, also in parallel mode. Both of these processors can be applied across the stereo mix, or on a pair of stems. ‘X-Former’ inserts a pair of custom transformers on the stereo mix and has a control for core saturation. All three tone controls can be active at once, and the order of signal flow through distortion and limiting can be flipped.

Dangerous Music pioneered the dedicated rack-mounted analog summing device for the back-end of any digital audio workstation in the late 1990s, and the Dangerous 2-Bus proceeded to take its place as the industry standard solution for the analog/digital mixing workflow. The new Dangerous 2-Bus+ (…pronounced “Two Bus Plus”) is set for release through dealers worldwide in Q4 2015; the street price is $2,999. US.