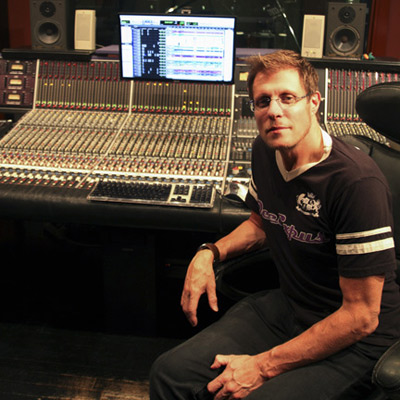 “I use a lot of outboard analog equipment when I track and mix,” says Mouser. “Neve and Telefunken mic pres, Urei, DBX, Manley, Alan Smart, and Neve compressors as well. Over the years I have collected a great assortment of analog effects such as an EMT 140 and 240 plate reverbs; Echoplex EP3 and EP4 tape delays, flangers, phasers, and a Cooper Time Cube. I have also held on to my MCI 24 track 2-inch and ATR 102 half-inch decks. Recording to tape is a great way to give drum tracks warmth and compression without really hearing it. I find when you’re recording drums straight to Pro Tools, you can have your levels set perfectly and suddenly a snare drum hit for no particular reason will pop into the red, causing a digital over; whereas once you go to tape, all those peaks just go away…the tape takes away the rough edges, they just disappear.”

The Live Room
“The live room is the thing that sold me on this whole space,” recalls Mouser. “When I first saw it on a rainy February night and I clapped my hands in the room, I was excited! ‘Damn, drums would sound amazing in here,’ I thought-and they have! [laughs] It has cathedral ceilings that slope down from 35 feet on one side to 25 feet on the other. There are very weird, odd shapes to the room. The walls have many non-parallel angles, which gives it a nice dispersion; and it’s very even on the highs, mids, and low frequencies, which I really love. Sometimes you go into a room and the low-mids carry a long decay time while the highs roll off quickly, causing a muddy sound and a boxy build-up. The live room has got a ‘crack’ in the upper-mids that really helps make a drummer sound like he’s just killing them!”

“You can also do a lot of fun things to the room sounds with compression and/or gating of the mics,” adds Mouser. “Using the close mics to key and gate the room mics will give some very dramatic industrial sounds or an over-the-top ‘a la Phil Collins’ flavor. You can also get this super big, bombastic ‘When the Levy Breaks’ sort of thing. The room can tighten up also, it all depends on the way the mics and compression are set, and the way you baffle and diffuse the space. There is another smaller tighter room where I put the drums for that 70s funk and R&B sound.”

Vintage Calrec
“The mixing board is a Calrec UA 8000 with 56 inputs. There were only 13 of these boards made. They’re from the mid 80s. The band ABBA had one at their Polar Studios in Sweden, and Abbey Road had one too. Peter Reardon owner of Shadow Hills Industries turned me on to them. Thank you Peter! They have a beautiful, very musical, punchy sound reminiscent of a cross between a NEVE and an API to me. Calrec described it as a console specifically designed for music production!” explains Mouser.

“I have 48 outputs from Pro Tools HDX and split them across the UA 8000 console,” he continues. “Mixing several projects simultaneously requires the ability to recall any song on any project at any time! I utilize outboard compression via Pro Tools insert points and use plug-ins to control the gain fed into the compressors if needed. I also print all of the various analog outboard effects used in the mix to separate tracks. I used to have effects running live during the mix but then, when you wanted to recall a track and change something you would have to set them all up again [laughs]…a lot of note taking and patching! Now they are printed! That’s the beauty of having such a high track count in the digital world. You couldn’t do that very often on 24-track 2-inch because you rarely had any extra tracks to print to. Automating digital EQs also comes into play quite often when bouncing between different projects. It is a lifesaver.”

On Microphones
“The Neumann U48 is a wonderful tube condenser mic from the late 1950s. Put that several feet back from the kick drum and you totally hear where some of that John Bonham sound came from,” reveals Mouser. “The Beatles used it extensively as a vocal mic. There are several photos of John and Paul gathered round it. Additional mics at the studio include Neumann U87s, Sennheiser 421s, AKG 452s, D112, Electro-Voice RE20, Coles Ribbon mic, and of course, the standard Shure stuff, 57s and 58s. Another Shure mic that I like is the Shure 545. They’re actually a fairly old-school cheap dynamic mic. I’ve used it on vocals on a few albums, I had a group from Ireland in here called Jaded Sun. The singer had that raspy Steve Marriot (Humble Pie) sort of voice. I tried out several mics including the U48, but the 545 just worked the best!”

“For room mics, I always like to have a pair of fairly inexpensive dynamics pointed at the wall or ceiling away from the drums instead of pointing towards them,” he adds. “That way you get pure reflection. The nice thing I like about using those mics is that they don’t get too much of the upper frequency cymbal stuff, and not too many of the lows. They become a solid mid-range room sound. When you bring them up in the mix you have a cracking reverb chamber without all the cymbals and other stuff that gets in the way.”

It’s Progressive and it Rocks
Rich Mouser is known as one of the top Progressive Rock recording engineers and mixers. He has worked with Spock’s Beard for 19 years, and their recent recording The Oblivion Particle hit the top 20 on the Billboard Heatseeker chart at #14. In 2014 Mouser’s mix for the prog rock super group Transatlantic won Album of the Year at the Progressive Music Awards in London; Transatlantic features Neal Morse (formerly Spock’s Beard), Mike Portnoy (formerly with Dream Theater), Roine Stolt (The Flower Kings), and Pete Trewavas (Marillion).
In the annual ‘Top 15 Albums’ for 2015, published by “The Prog Report Magazine,” Mouser’s production and/or mixing was in the number 2, 3 and 5 spots. In their top 20 songs list for 2015, his productions and/or song mixed were number 1, 2, 4 and 8.

Mouser also mixed the live album Second Flight: Live at the Z7 for Flying Colors, featuring legends Steve Morse and Mike Portnoy. The album was recorded live in Switzerland. Mouser did a stereo mix as well as a 5.1 ‘Front Row’ mix, and a 5.1 ‘FOH Board Position’ mix. Bill Evans, Executive Producer of the band Flying Colors, stated when listening back, “I’m really enjoying this mix. For what we were going for on this, it’s probably the best live mix I’ve ever heard. I’ve heard a lot of attempts at concert mixes that capture the ambience of a live show-they’re all done by engineers better than I can even fathom, but the results have always just sounded cluttered-Rich managed to crack the case…the results are gorgeous!”

Mouser says, “It’s a pleasure to work with such high caliber musicians on such intricate music. Most of the listeners in prog rock have a critical ear, which I appreciate-they’re the audience I’m mixing for.”

Farmikos, another production by Mouser, is spearheaded by guitarist Joe Holmes (Ozzy, David Lee Roth) featuring Robert Trujillo on bass, and Brooks Wakerman (Avenged Sevenfold, Bad Religion, Ozzy, Tenacious D) on drums. One of the cool aspects at the Mouse House is its MCI 24-track analog tape deck. While many studios have gone to a completely digital format, Mouser reserves the right to stay all analog when he wants to; and on the Farmikos album that he produced, recorded, and mixed, he always hit the tape before going into Pro Tools for editing purposes. The album was mixed down to the ATR 102 half-inch tape deck for some final analog warmth.

Mix, Master & Deliver
“Because of the increase in internet speeds, musicians send files to one another and make albums differently than in the past,” points out Mouser. “Gone are the days of everyone needing to be at the same studio at the same time-though it’s a wonderful thing when that can happen! I’ll get mixing projects tracked at several studios, home, and commercial, sent to me from all over the world. It’s no problem to download huge files now. All interaction is done through e-mail. You can make an album that way and it works out great. So mixing has been an ever increasing part of my work- I’d say it’s 70% of what I do now.

In addition to all the great gear and amazing live tracking room, the Mouse House has a comfortable lounge area too. The studio is in a quiet, secluded, rustic area. There are plenty of good restaurants that deliver nearby to make a recording or mix session flow smoothly. Clients can even take a dip in the pool to reset.

Mouser has stayed true to his vision of creating music that has been deemed sonically flawless. As the silent member in every band he produces, mixes, engineers, or masters, his dedication to the art of recording always shines through. He is a versatile engineer and has recently spread his wings to other musical genres, including jazz, country and pop.

To contact Rich Mouser call (626) 296-3224 or email him at themousehouse007@aol.com – For information on the Mouse House Studio please visit: www.themousehousestudio.com

All trademarks are the property of their respective holders.